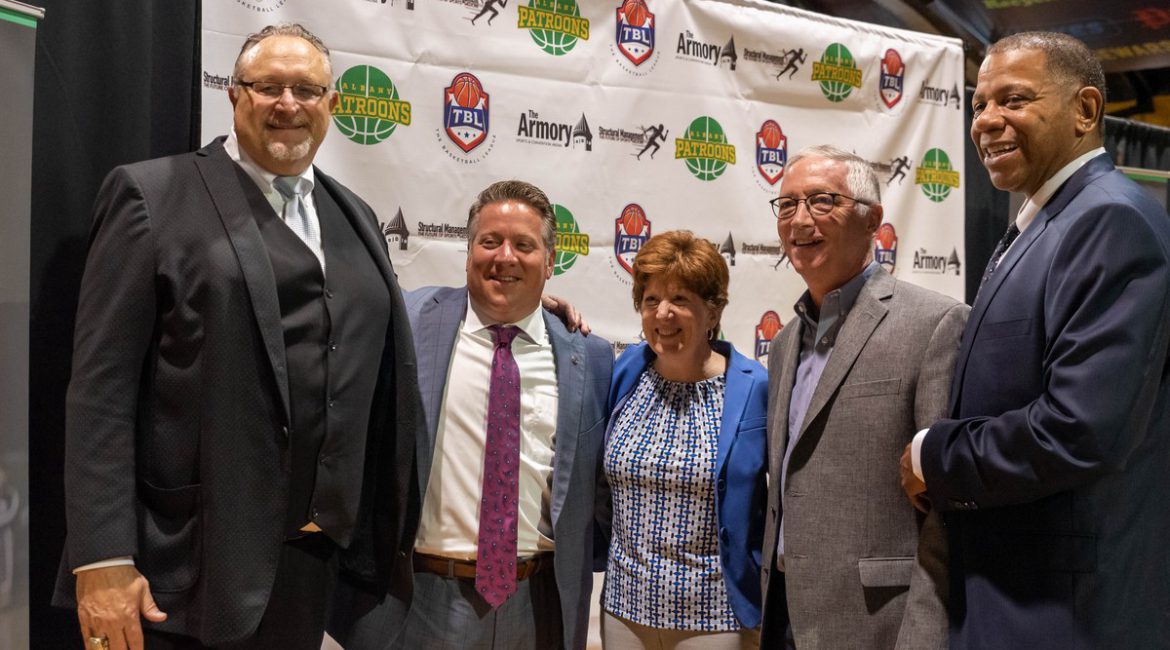 ALBANY, N.Y. (Sept. 4, 2019) — The Albany Patroons, the 2019 TBL champions, have announced Dr. Timothy Maggs has purchased the franchise with plans to expand and enhance team operations in Albany.

Dr. Maggs pledges to invest into the Patroons franchise, coming off their historic 2019 championship run, to raise the profile of the team in not only the City of Albany, but the entire Capital Region.

“This is a thrilling opportunity to be part of this storied franchise,” said Dr. Maggs. “Under Head Coach Derrick Rowland’s stewardship, the team has proven its readiness on the court and I look forward to working with the management team to enhance team operations. This is a team ready to explode and I’m proud to be part of this bright, next chapter for the Patroons.”

Dr. Maggs has been in private practice for over 35 years, specializing in the diagnosis and treatment of sports injuries throughout his entire career. Dr. Maggs recognizes the need for improved diagnosis and treatment of sports related injuries in the middle and high school age group, resulting in the formation of the Concerned Parents of Young Athletes™ Program. Dr. Maggs’ goal is to have all middle and high school athletes go through not only the standard medical exam at the start of each season, but also a biomechanical exam. This exam looks at the musculoskeletal system, in detail, and allows these young athletes to begin correcting imbalances, weaknesses and biomechanical faults long before they become injuries that create disability and premature degeneration. Today, Dr. Maggs works with athletes from more than 25 high schools, and is the director of sports biomechanics at Christian Brothers Academy in Colonie.

“Doc and I have been friends for more than 30 years and I’m thrilled to have him as part of the team,” said Head Coach Derrick Rowland. “Doc’s energy, spirit, vision and confidence will continue to build upon our success on the court and expand it to the community.”

“Thank you to Dr. Maggs for his vision in buying the Patroons and for believing in the Capital Region by making this investment,” said Albany County Executive Daniel P. McCoy. “And of course, I need to recognize Coach Derrick Rowland for his leadership and bringing out the best in this great team by winning The Basketball League Championship this year. When we invested in the Times Union Center, as we continue to do, it was an investment in our future, and we fought to bring Arena Football back to Albany County. So now we have the Albany Empire, the Tri-City ValleyCats and the Albany Patroons representing the Capital Region.”

“Following their victory in this year’s title-clinching TBL Championship, the Albany Patroons stand ready to bring their game to the next level. This change in ownership promises to elevate regional basketball’s profile in the Capital Region to a new echelon, and I look forward to seeing what new owner Dr. Timothy Maggs has planned for the team and fans alike in the future,” said Assemblymember Patricia A. Fahy.

The Patroons will return to their home court inside the historic Washington Avenue Armory in Downtown Albany. The Armory has been the home for the Patroons since the team’s original founding in 1982. As part of the 2020 plan to enhance the fan experience, additional parking will be available on game days.

Michael Corts and Rocco Ricchiuti will both return as general manager and director of corporate partnerships, respectively.

“The energy and excitement Dr. Maggs brings to the team is simply electric,” said Corts. “I’m ecstatic to work with him, Rocco, and Coach Rowland to defend our championship in 2020.”

Additional community and corporate partnership opportunities will soon be made available. Those interested in learning more information can contact [email protected] “If you’re a Capital Region business or organization, Albany Patroons partnership opportunities are affordable and rewarding. We look forward to connecting with local businesses…and we’re confident that our community marketing and promotional ideas will be rewarding to our partners and impactful to the public all while generating awareness and growing our fanbase.” said Ricchiuti.

For more information about the Albany Patroons, visit patroonsbasketball.com.

About the Albany Patroons: Originally entering the CBA as an expansion franchise in the 1982–83 season. Hall of Fame Coach Phil Jackson won his first championship ring as a coach when he guided the team to the 1984 CBA championship. In 1988, the Patroons won a second championship, this time under head coach Bill Musselman. Musselman would later coach the Minnesota Timberwolves. Future Hall of Fame Coach George Karl also spent two successful seasons with the Patroons. Fast forward to 2019; the Patroons are back and competing in The Basketball League. Head Coach Derrick Rowland is building on last season’s success to bring another championship back to Albany. albanypatroonsbasketball.com